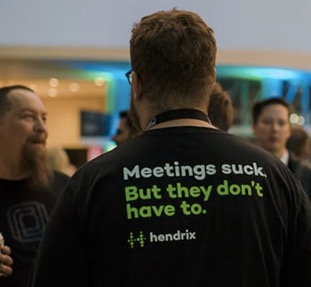 More than 100 organizations have already tested the beta version of Hendrix, a natural-language AI assistant that attends business meetings, transcribes meeting summaries and action items, and archives those summaries in a simple dashboard alongside insights about users’ meeting history. With Hendrix, users can simply search keywords, dates, or names within the dashboard, to quickly and easily find and recall key meeting details.

“Hendrix has significantly improved our meetings, and the high-level actionable summaries that come away from them,” said Sahr Saffa, Founder of Cappsule/C-Tribe. “It removes the need for multitasking during important discussions and it allows us to actively listen to our partners while keeping our meetings productive.”

Hendrix.ai was recently named to the Constellation ShortList™ for Augmented Meeting Services in Q3 2018, was the recipient of the 2018 Startup Canada Prairies Region Innovation Award, and named as a finalist in the Best Intelligent Assistant category for the 2018 AIconics Awards.

Why Companies Need Hendrix Now
Damer founded Testfire Labs, his fifth startup, to create ways for companies to leverage technology tools that help their employees be more productive and fulfilled in their work.

The first commercial version of Hendrix focuses on data capture for business meetings, which have been found to waste, collectively, almost $40 billion per year, according to data collected by software company Atlassian.

“Today,” Damer said, “Hendrix captures meeting notes and data, and delivers insights through meeting data analysis. In the future, Hendrix will integrate curated public, subscription, and private data, answer general questions, and surface answers based on the specific profile of the company.”

Price and Availability
The commercial version of Hendrix.ai is available now to North American organizations at the enrollment website: http://bit.ly/2xgrQyy. Subscriptions, which include a free, fourteen-day trial, start at just $39 per month.

About Testfire Labs
Testfire Labs develops enterprise productivity tools that modernize the way people work, so they can achieve more, faster. Founded in 2017 and headquartered in Edmonton, AB, Testfire Labs has received seed funding from the National Research Council of Canada Innovation Research Assistance Program, Iris Technologies Inc., Alberta Innovates, and various private investors. The company recently was selected as a Top Startup to Watch by Startup Edmonton, named the 2018 Prairies Region Innovation Award recipient for Hendrix.ai by Startup Canada. Additionally, the Information Technology Association of Canada (ITAC) has named Testfire Labs as a finalist for its 2018 Ingenious Spark Award, and Testfire has also been nominated for Startup of the Year through the National Angel Capital Organization (NACO).

Information is available at https://www.testfirelabs.com/.